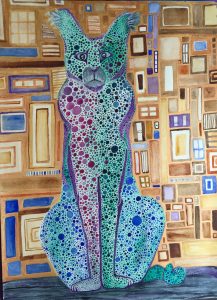 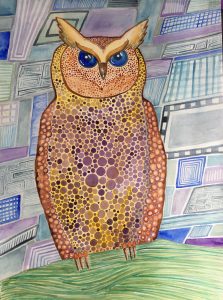 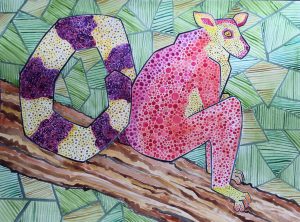 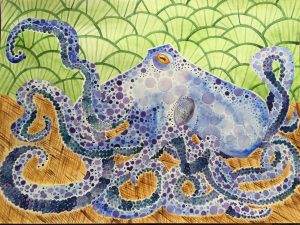 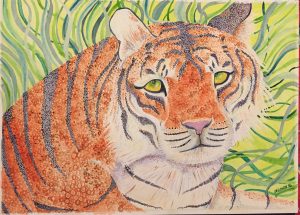 For the last year things have been a whirl. Moving is hard! Getting married seemed easy by comparison. Of course, I wanted to get married but does anyone ever really want to move. It’s a thing you do out of need!

But the upshot has been getting an awesome garage studio. That had also been a lot of work but I’ll show you that later. Before I got the studio almost) ready, I was down to a handful of artist tools. Mostly just paints, pens and watercolor. So I’ve spent my art time doing ATCs, doodles and drawings and trying out a new watercolor style idea. It’s a mix of I dunno, geometry and pointillism? The Serval, Owl, Lemur and Octopus were experiments. The Tiger ends up being the result of the learning from the others. It is going to the Wildcat Black Tie Fundraising auction.

I definitely have learned some watercolor techniques that will enter into my painting from now on. And well any practice with watercolor is helpful. Cheers! 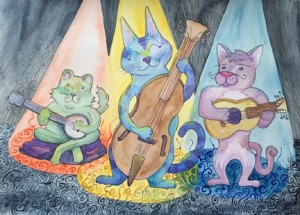 I got this little piece accepted into ta show called Cats & Guitars! It was fun. If you happen to be in Arizona, go check it out, looks like a lot of fun stuff in the show. 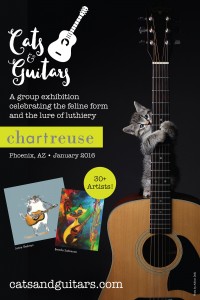 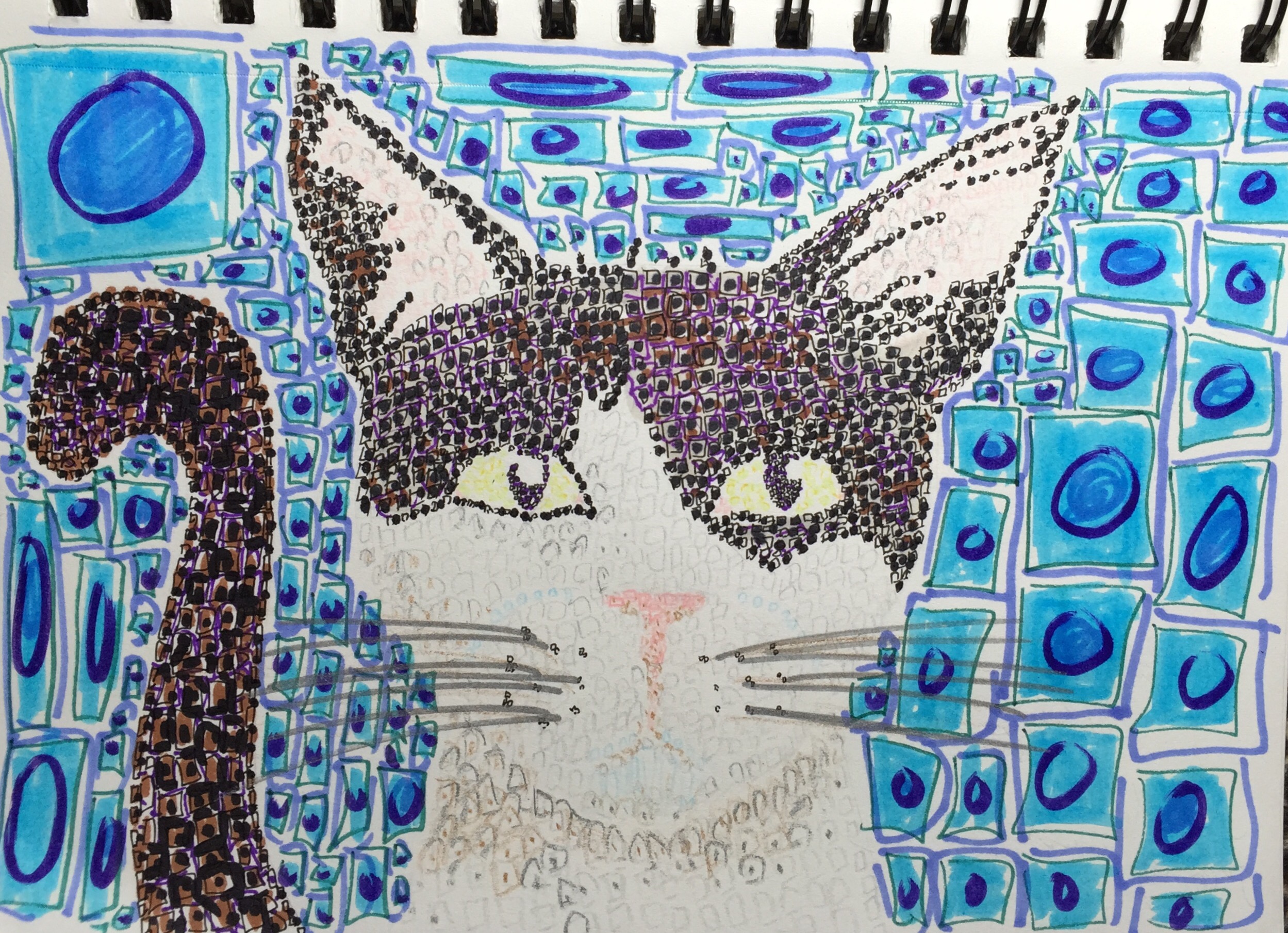 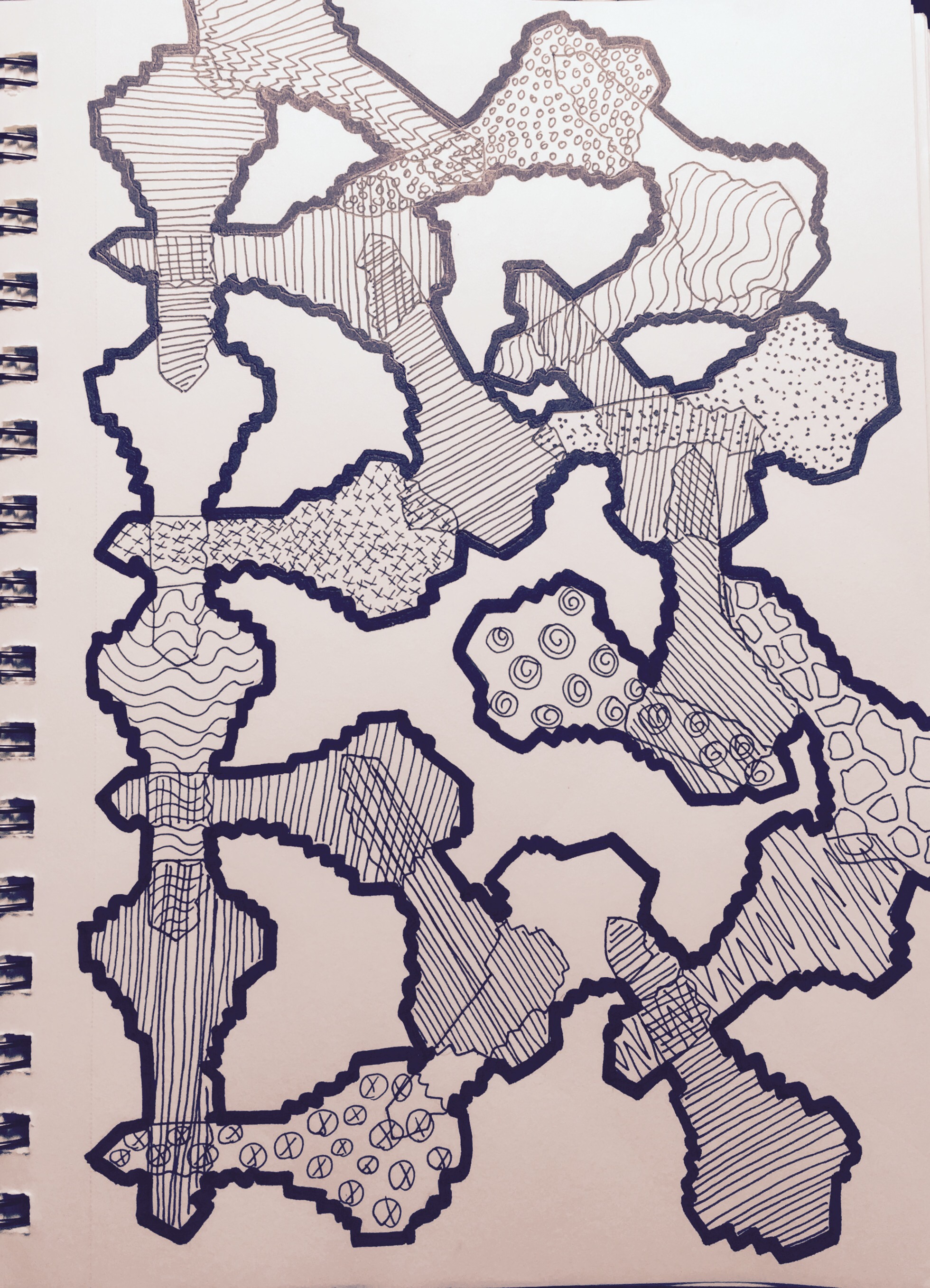 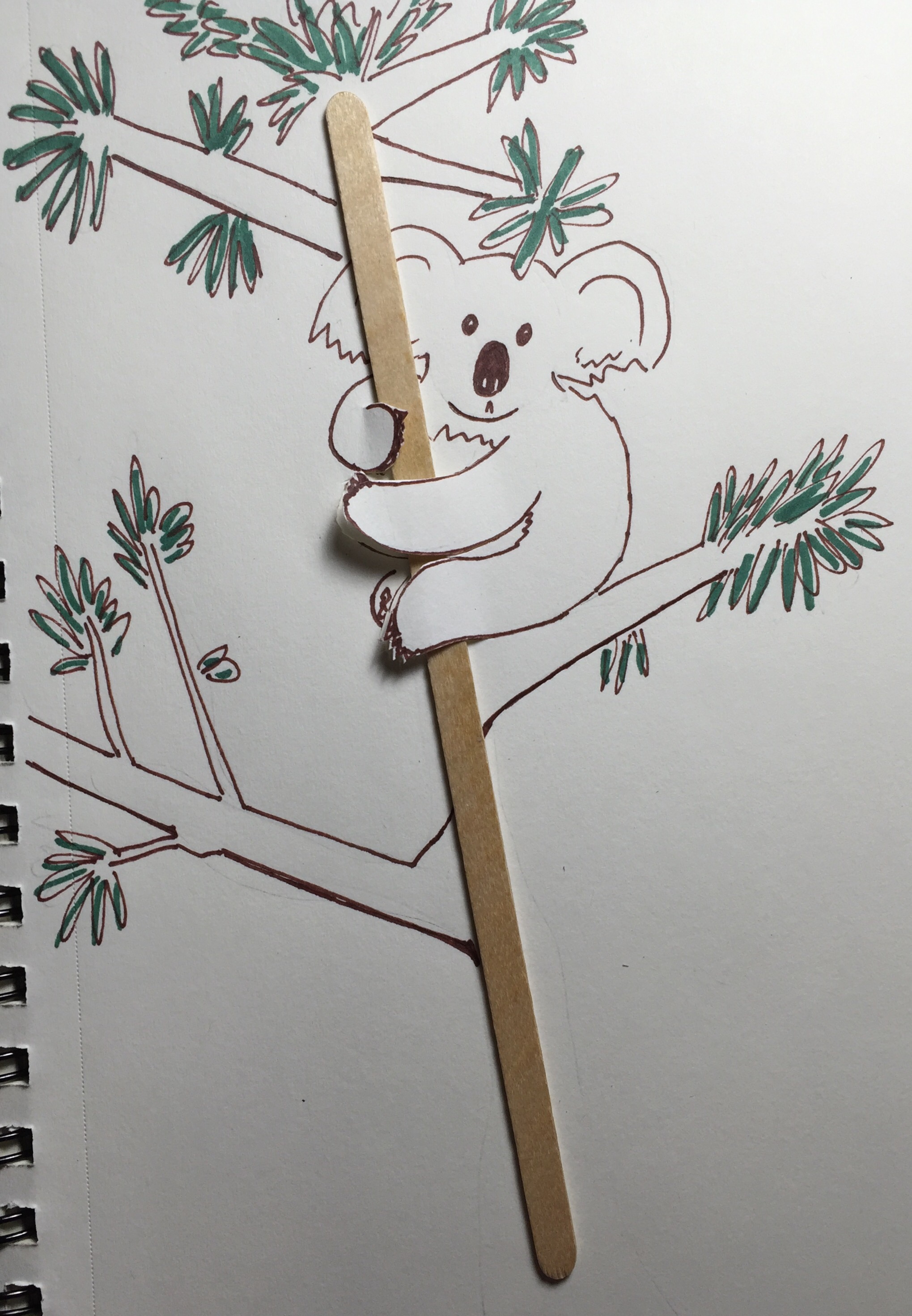 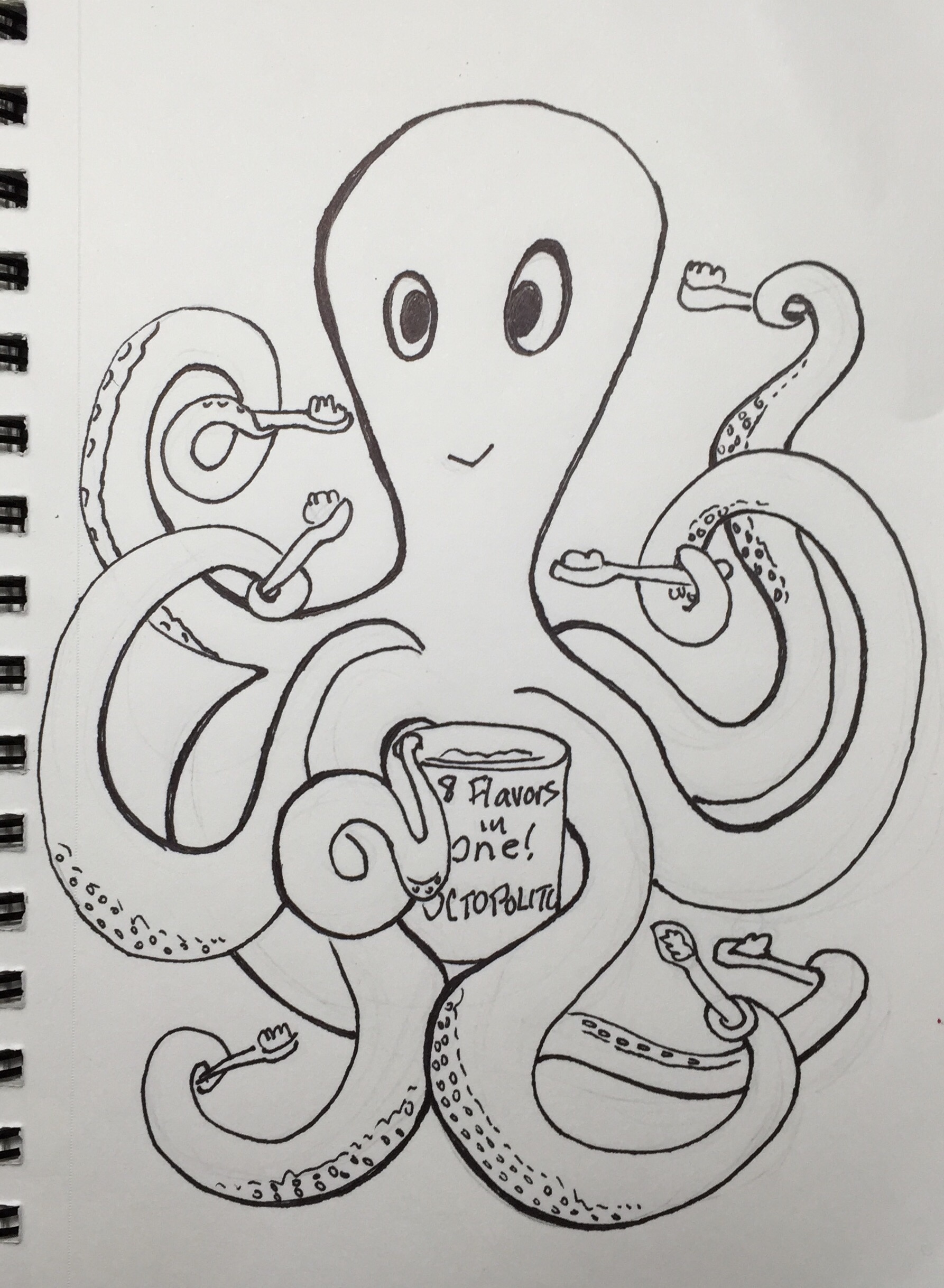 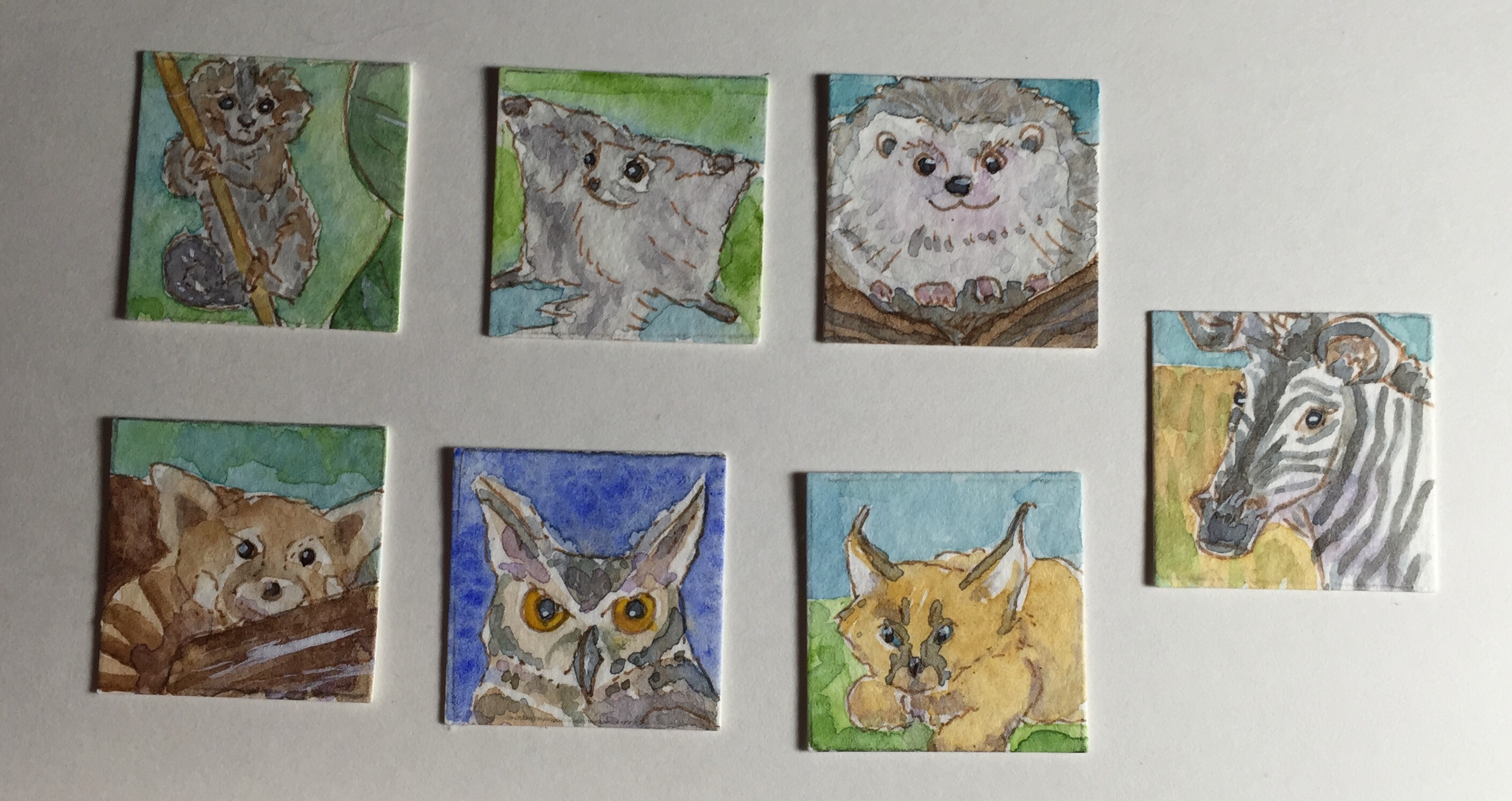 I’ve been doing a daily art project which is been a great experience. And keeping up with ATC swaps and working on larger projects. The daily art thing switches topics every two weeks. It’s been great for generating ideas and trying out new things.

Ta-Da! Done. I did rebind my book for more interesting papers and sizes! I did ink and colored pencil with one watercolor page. I used an idea that started as a tessellation project, where I turned each tile into a character. That was fun to make my brain think of way more things for those repeating shapes. And it was fun to expand on those creatures. The Sketchbook Tour info is here. Go see it if you can, it’s a fun, free art outing. 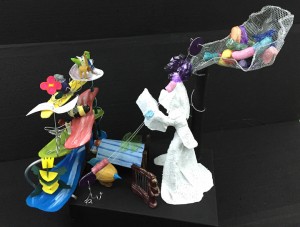 I can finally show you the Mystery Project. First what it is: You join to participate and everyone who joins is given a box full of art supplies. The same supplies. I suspect the supplies are chosen in part to give as large a variety as possible. This year it included various woods, poles (wood and metal), metal mesh, clay (non-hardening), plaster wrap, wire, thread, Styrofoam, canvas and odds and ends. It had a few weird items like a foam Van Gogh ear, a artist’s mini mannequin and a plastic egg. The bonus is that you can also use the plastic wrap, the box and the packing peanuts enclosing the items. Your project can be a working model that fits the theme, a sculpture or whatever. You enter into the finals with photos or a video. The theme this year was ‘Build a Dream’. You are sworn to secrecy of the contents until the entries are up.

As an artist I love thinking of a thing and creating it however I want, using whatever materials I want. I love thinking of something and figuring out how to make it work. Or thinking of something and bringing it to life. I enjoy the Sketchbook Project because it’s limited only by final size. I found the Mystery Project website and thought ‘this sounds fun’. And it was. BUT it was also super challenging because you are limited by the objects and materials given. Mind you, glue and paint are ok to add, but that’s it. So it was like stepping into a different place of creativity. The world of ‘here’s my idea and can I use this stuff, how do I make that work’. My project both turned out better and worse then I hoped. I couldn’t always make the materials behave, but I did more then I thought possible and it was great solving all the problems. I definitely felt like I had to grow a bit and concede sometimes. All in all I’m pleased, I hope if you have a chance, go check out all the projects, mine is #183, if you should want to vote for it.

Sometimes I like to do a little thing for other folks. I did these postcard sized pet portraits to Tiny Timmy’s safe flea medicine indie-go-go campaign. And now I just finished this panther for the Wildcat Sanctuary. I got to tackle watercolor in my less then usual style and it was pretty fun. 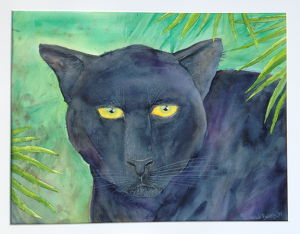 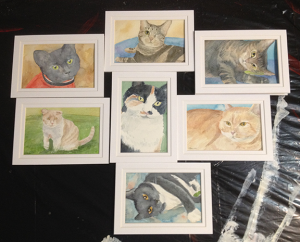 Randomly, I said I’d build a dragon for GnomeCon, since we couldn’t keep the dinosaur. Secretly, I always wanted to build a dragon companion to Gigi. I always had one pictured as lying on it’s belly on a horde of gold, reading about Hording for Dummies. (yes, it will be forthcoming) But for GnomeCon it need to be big, a good eyecatching, door greeting beast. And I had to keep out of the cute arena. It’s true, I have a hard time not playing cute. I can do realistic, I can do simplified graphic action-y but I live in cute most of the time. So this meant I would go campy. Funny, but not cute. Hence the idea of the Gnome cookbook was born.

When I started it came down to logistics almost immediately. I had to gather stuff to build, I had a limited budget, which I added my own money to. I had to think about transport, I had to think about size. Some of these things got thought about later then they should have. So there’s a change in the hind legs he sits on, because I had to get him out my front door. I did end up taking the screened porch apart to get him loaded. (screen door smaller than front door; perhaps I need studio space!) You can see that in the slideshow. I did build him in pieces from the start, so he could get smaller for transport. I was specific about his infrastructure so he could be held and moved safely on certain parts of his body. In the slides you’ll see, I corrected an elbow after painting, I change his color from green to red and I added wings at a very late point.

Still I learned a lot: how to beat up cardboard and bend it to my will, how useful that plastic moving wrap is and why you should invest in styrofoam spheres. All in all, Samual Dominus, Eater of Gnomes, Master of Recipes, Keeper of Spices was well loved and well thought of at GnomeCon. I know a lot of photos (pro and fan) were taken with him!

Here’s a slideshow of him being built from pvc pipe and cardboard stack to finished installation. Enjoy!

For the last few years I have participated in The Sketchbook Project. It’s a nifty little show that invites artists of all ages and levels to fill out a sketchbook and send it in. It then becomes a part of the library at the Brooklyn Museum of Art. During the following year, the sketchbooks all go on a rock tour of the US and a few other countries; they set up in lots of cities and invite everyone to come view the sketchbooks for free. Often the venues are fun and interesting. I recommend going in a group so you can all check out sketchbooks, trade and view them as a group.

Anyway, I decided on a theme of ‘Unknown SteamPunk Inventions’ for my Sketchbook this year and here’s the pictures I drew. I have for the last few years, rebinded my book and changed the page layout. I like for my books to be an adventure in discovery and surprise and delight. Like in years past, I got lots of great ideas, many of which will develop into bigger ideas and actual works of art. 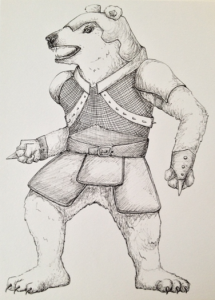 I have to say, one of the coolest things of the Golden Compass movie was the visuals and how awesome the armored polar bears were. (Yes, the books were better, as the movies took all the philosophical bite out. so it goes.) Still the effects and characters were well done and afterwards, I wished for a moment I had a talking armored polar bear friend.

So I was pretty excited when a weightlifter I know, asked me to design an armored polar bear he can print on a shirt and wear to his competitions. I had no idea how I would tackle it. And I have to tell you that my default art setting is ‘cute cat’. So much so, one of my early illustration teachers looked at my worked, told me some people were better off working at cute and I should aim for children’s book illustration. I took that advice and it was a lot of years before I could do something like this bear. I have to give some credit to all those ATCS here. And to some time spent dabbling in replications of old, damaged paintings for people.

Stretching out my legs in ATCs and replications, is what made it possible for my to develop this armored bear who is not warm and cuddly and definitely not cute. Taking on the occasional uncomfortable ATC project gave me some skills I thought would remain undeveloped. I’ve always thought training as an illustrator meant you could pretty much do anything; you learn skills in forgery, copying and replication, since you have to give the customer what he wants. The assignment is often similar to something he saw, a tenth generation version of an idea you start with and you often learn new media and techniques to make it happen.

Now for the first time in my life, I do actually feel I could do anything artistically and the picture of the awesome idea in my head is translating perfectly to the art.