Here’s the story of Gigi the Giraffe. 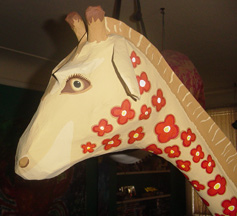 This is Gigi the giraffe. Gigi’s history is this. I enjoy doing paper mache. The more complicated, the better. Add this enlightened moment I had as a kid: Once I was going through New York City, aged 11. It was night and I was looking up in people’s windows. I looked in one and saw a big giraffe in the window. I guess it stuck.

On New Year’s a few years ago, I thought of something I’d been meaning to try. I had already done the peach (see the bio page) but was thinking of something more complicated. So Gigi the giraffe was born.
I’ve been looking for a new home for Gigi, though I have considered making a whole large scale zoo. I don’t have room for a zoo though. Still, finding a home for a six foot giraffe is not so easy either. 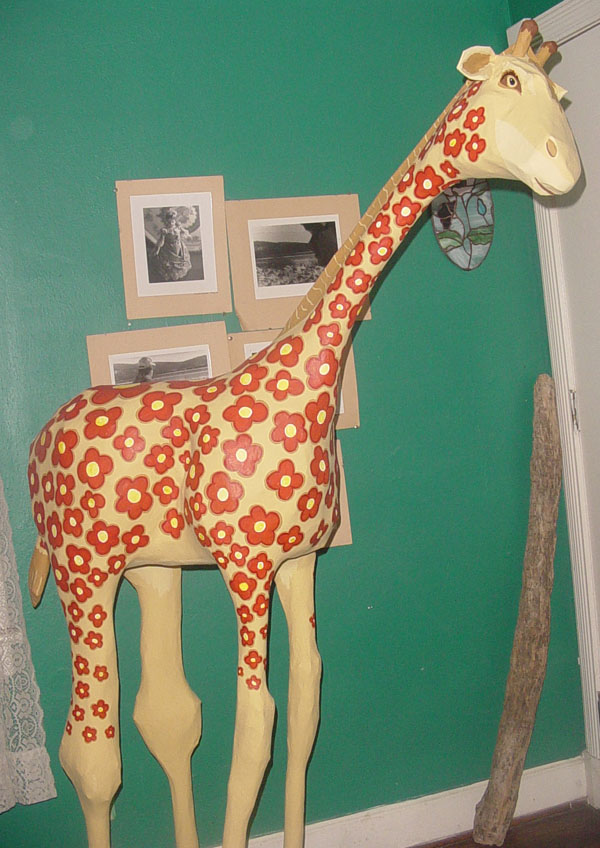 Gigi is made from styrofoam, paper tubes, newspapers, phone book pages, wood, tissue paper, glue, water, paint and varnished. I don’t know what made me think of flowers for spots. One of those magic, floating ideas that find artists. Gigi is modeled on a young giraffe, just beginning to grow horns. She’s shiny now, having been varnished for protection.