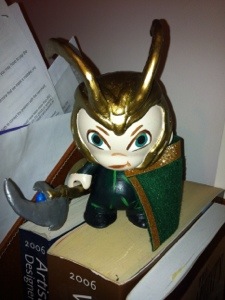 One of the fun things for artists at Christmas, is that we get to make some of our gifts. I try to reserve making gifts for people who want something hard to find. This year I turned a tiny collectable Hello Kitty into zombie HK. I made a string of beads. I made two stuffed plushies (which I’ll post next time after that gifts are received). And I customized a blank Munny into a Loki.

The thing about Munnys is they can sit around for a while until you figure out what to do with them. My friend was looking for a bobble head Loki or something similar but no one could find one. Of course I had this blank Munny, my first ever, waiting for something. After some research on customizing Munnies in the Kid Robot forums, I got to work.
The great thing about a Munny is you can add Super Sculpey to it to customize your character. That’s how I built the helmet, bracers and boot tips. Oh yeah, and I used an old paint brush handle and made his staff. Then, even though the Munny is vinyl, you can bake the Sculpey right on it! It comes out of the oven a bit soft and hardens as it cools. Then a bit of paint gets you mostly done. Just to throw it over the top, I added a felt cape.

I was pretty pleased with the results and so was my friend. And now I have a new addiction (the forums warn of this) and a new medium. Hand made gifts can be great for discovery if you let it push you a little further than you’ve been before.